Just returning from this year’s ALD Connect Annual Meeting and Patient Learning Academy and trying to decide what to share. Last year, I shared that I had met some of my ALD heroes and that number grows every year. People who have devoted their lives to helping our disease through education and research – changing policies, raising money, raising awareness and working on cures for ALD.

This year my biggest take-away (other than a massive hangover — drinking 9 ounce glasses of Sauvignon Blanc after a long day of sharing and listening was probably not a great idea) was that our community is now determined to get rid of the “C” word.

Twelve years ago when we were told that Jack had ALD, it was found that I was a carrier. I had the genetic mutation for ALD and had passed the disease down to my son, but I would never be affected by any symptoms. ALD is an X-linked disease and only one of my X chromosomes was affected. I had another X chromosome that would do the work for two.

Then problem with this information is that it’s not true.

The first time I walked into an ALD conference, the first thing I noticed was the amount of men and women clearly suffering from symptoms. I had been so focused on the childhood, cerebral form of ALD, I had almost forgotten that there were other phenotypes (different versions of the disease). In the case of ALD, these phenotypes include:  Cerebral ALD (the worst manifestation of the disease which Jack has), Adrenomyloneuropathy (AMN) which usually starts later in life and often presents similar to MS, adrenal insufficiency where the individual’s adrenal gland is affected, and the lucky few who are asymptomatic.

That first ALD conference I tried to avoid too many questions about the other phenotypes of ALD. I had just managed to wrap my brain around what our family had gone through. I couldn’t begin to contemplate that this disease might leave a mark on anyone else in our family.

As the years have gone on, and I’ve become more educated about ALD, I could no longer ignore the ugly truth that ALD was not yet done affecting us. Our family is small and I believe that everyone who needs to be, has been tested (if you haven’t – call me. I will first yell and then give you the information you need to get it done). As far as I know, my mother, Jack and I are the only people with the genetic mutation. We suspect that my grandmother on my mother’s side also had the gene because of the complaints she had later in life. Balance, neuropathy, bladder issues are common symptoms for women with ALD and my grandmother had all three.  She lived a long life with these symptoms, never assuming it was anything other than getting older. While annoying, they never seemed to hold her back. My mother, now in her seventies, has been suffering with balance issues that are progressing enough that she is going to see an ALD specialist. She is done pretending that ALD is just for men/boys.

I’m so proud of my mother, but I haven’t been sure I was ready to discuss my symptoms openly. Over the last year, I have started trying on the words. When people comment on my constant runs to the bathroom or clumsy falls, I might quickly mention that ALD is to blame. I’ve gotten rid of any shoes with a heel or platforms because they make me look and feel as unsteady as walking on a tightrope. And, I’ve shared with my close friends that I’m scared of not being able to care for Jack if something happens to my ability to walk BUT then I quickly say that I’ll be fine. “My mom is clumsy, but not using a walker or a wheel chair. I’m sure I will be just like her.”

How can a disease be so cruel as to affect a child AND their caregiver? 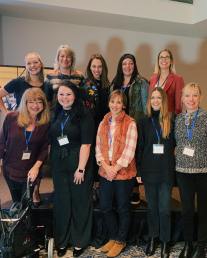 At the conference, I was sitting with a group of women with the ALD gene and we were each sharing our story. I was the fourth person to share, when the woman across from me interrupted, “Each of you are starting with someone else’s story. Your son, your father, your brother . . . We are here to discuss you and your ALD story.” I swallowed hard, but she was right. It’s time for our community to acknowledge women with ALD. I reluctantly talked about my increasing clumsiness and awkward relationship with the bathroom. Others in the group had more complicated complaints and were braver than I was. The woman next to me started with, My name is, D$#@, and I have ALD.”

As women, symptoms range and (like all people with ALD) nobody knows where their journey will lead them, but it’s time we all band together. We need to get the proper care for those of us who are suffering and need to educated doctors and nurses and each other.

No more hiding — THIS is ALD too.

For more information about x-linked diseases, check out Remember the Girls. Here I am with it’s founder and one of my ALD heroes, Taylor Kane.