Remember when Facebook was a safe place to scroll through photos of old friends and cute puppy videos? Now I find myself taking a deep breath before sitting down at the computer and diving in.

Apparently, our family has been living in a bubble. A beautiful, diverse, inclusive bubble. A place where all people are accepted and we all believe in science (climate change is a FACT). Where everyone feels safe and neighbors are always there the help or lend some sugar. Where you walk down the street and you are greeted with smiles and hellos. Where teenagers get busted for their parties because they recycle their empties (true story – it’s happened more than once. Teens here risk getting grounded just to be Green). It’s called Maplewood. I’m not saying that our town is perfect, but it’s pretty darn close.

Unfortunately, the last two weeks have made it clear that some people in our country really want to pop our bubble. I’m getting scared.

Building walls, defunding NPR and the National Endowment for the Arts, potential (very conservative) judicial nominees, changes to immigration, Sessions, DeVos. Politics used to be background noise in my life and now it’s center stage — there’s so much information – my brain is spinning!

It takes a lot to get me to talk about politics. Part of it is that I want everyone to love me and being opinionated can discourage love, but the biggest reason I’ve avoided political talk is because I don’t want to be questioned. I know what I believe, but have always been a little fuzzy on the details necessary to have a chance of winning a debate.

Now that Facebook has gone from being a fun place to a scary civics lesson, I realize that it’s time for this mom to start being informed and prepared to defend her beliefs. Anna and I marched together in New York last weekend. It was a beautiful day and the energy from the crowd was like nothing I’ve ever experienced. Thousands of people marching as one. Marching is a good start, but walking with sweet signs is just the beginning. I have a feeling this is going to be a long road.

This blog is about our family. Our family is the one thing in the world where I AM an expert. I am not an expert when it comes to politics, but I do know when I feel that my family is at risk – when the country that I treasure is at risk. I have done a lot for my children. I have fought with doctors and insurance companies (even an occasional pharmacist), but fighting for my children can’t stop now. Now really matters.

Love, Jess (the mother of a strong, independent young woman and a teenage boy who has special needs and more “preexisting conditions” than I can count. Oh, and a human that loves the arts, choices, our melting pot and our planet)

The response to It Shouldn’t be a Secret has been a little overwhelming. I went from not being sure if I was ready to share the news that Jack was using medical marijuana, to having over 4000 people read the post and fielding tons for phone calls, emails and texts filled with stories and questions.

Overall, there has been very little judgement. In fact, it seems that everyone has a friend or family member who has used cannabis for medical reasons. Some of the most conservative people I know seemed almost relieved to share their stories that they had hidden away as if they had done something criminal. Wait – in much of our country marijuana IS criminal – THAT’S part of the problem.

The one hint of criticism came in a question asked repeatedly. How did we explain to Anna that her brother was going to experiment with pot?

First – Jack is not “experimenting with pot” – he’s trialing the medical benefits of cannabis (that sounds way more official).

We did approach the conversation carefully, but we were honest with Anna from the start. Anna is only sixteen, and by all means we do not condone the use of any substances by young people, but — BREAKING NEWS — teenagers have seen more than you think. Anna knows people who use pot for other reasons than trying to alleviate the spasms in their feet. She was not shocked by the word “marijuana” and she understands that what’s good for her brother is NOT good for her (or her curfew). 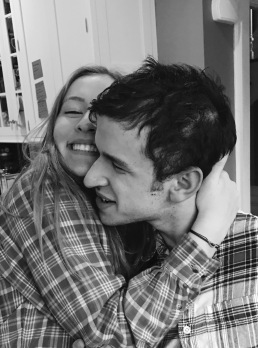 Also, people need to remember that Anna is not your average kid. She was six-years-old when her family scattered and she was told that her brother might not survive. She has witnessed the reality of life changing overnight and the fact that there is often not a right and a wrong answer when searching for solutions. Instead there is often a “maybe if we . . . “ and “let’s see if this works”. Anna is interested in studying biomedical engineering. It took me a while to truly understand what that means other than many, many years of education post high school. My limited understanding now appreciates that Anna wants to help create treatments to save lives. ALD, cancer, ALS – watch out. When Anna sets her sites on something, she’s all in.

Now that medical marijuana has been a success in our house Anna seems to be wondering less about the smell in our kitchen and more about what in cannabis is helping Jack. The scientist in her is fascinated. Lucky for us, because I’m more interested in the fact that it’s working then why — it’s probably good to have one person in the house who understands the science behind it.

As far as the stigma on marijuana – we’re getting over that. The more research we do, the more solid we are in our belief that marijuana is a remarkable drug with a host of benefits. Just last week, top scientists at the National Academies of Sciences, Engineering and Medicine weighed in on marijuana and it’s health effects. After considering more that 10,000 studies, they concluded that marijuana is helpful for pain relief, muscle spasms related to MS (a disease similar to ALD), and for treating nausea and vomiting associated with chemotherapy. I think it’s time we all take a look at our medicine cabinets and realize they’re filled with far more harmful things than cannabis. Hopefully we will continue to see positive change in policies regarding marijuana (although after today, who knows?).

So, that’s how we handled the Anna situation. We were honest. I’m not sure how Dan and I would have parented teenagers under different circumstances, but we have ended up be the kind of parents who answer questions honestly and openly. Anna might not know every detail of our histories or every decision we make now, but she knows her share, and Anna has turned into quite an incredible person – I guess we’re not doing such a bad job.

Anna’s not completely without complaint. When I am baking for Jack, she always reminds me that I NEVER bake for her. Sorry.

I apologize to anyone who was at the Millburn CVS on Sunday. All the pharmacist said was that our prescription would not be ready until the next day. She didn’t know that it was my third attempt to pick up … END_OF_DOCUMENT_TOKEN_TO_BE_REPLACED

If you’ve come to our house lately you may have noticed some changes. There are signs all over food in our kitchen saying “JACK ONLY” and there’s a lingering smell in the air. We had someone working on the alarm … END_OF_DOCUMENT_TOKEN_TO_BE_REPLACED