Chelette reached out to me to share her son’s story and I was so impressed with how determined she is as a mother. Many of us ALD moms have been forced to fight with doctors to find the correct diagnosis for our sons. In this family’s story, this mom wasn’t just fighting for her son, she was fighting for answers to other questions in her family’s history. Thank you Chelette for sharing Hutch’s ALD story.

Our son Hutch was a perfect 9lb. baby. As a child he was kind, bright and athletic! Hutch was the kind of kid who never had to be told twice and never needed to be put in a time out or punished. So when he was nine-years-old and we started seeing changes in behavior and struggles in school, I got concerned. I started telling doctors that something was up, but everyone blamed adolescence.

Hutch had febrile seizures as a child that no one seemed concerned with.  He had a seizure when he was six (almost out of normal range for febrile seizures) so I spoke with a neurologist, but he was not concerned. Then Hutch had another seizure when he was nine, so I saw another neurologist. She actually told me he would never have another seizure and not to worry about anything. This was not believable to me. At every neurologist visit I would always share that my dad had a neurological disorder, but still no one listened to me. They all blamed adolescence.

My father had some neurological issues that started around age 28. His gait changed and he started to drag his legs while walking. No one was ever able to give him a true diagnosis. They said he had spastic familiar paraparesis, which never felt right to me.  His skin was very dark and he was bald.  By the end of his life, he was wheelchair bound (he could walk, but it was too taxing on him). He died during an angiogram at age 51.

I became so concerned by the time Hutch was nine-years-old, that I took him to see a neuropsychologist, an audiologist, a few neurologists. No one seemed concerned. He had what seemed to be auditory processing disorder and he had attention issues but no hyperactivity so again doctors were not convinced there was anything significantly wrong. Every direction I turned, we could not find an answer.

In November of 2015, 3 days before his 13th birthday, Hutch had a 90 minute seizure. Yep, that wasn’t a typo, he had a 90 minute seizure … I didn’t think we would see him again. Miraculously he survived and that seizure was an important piece to the puzzle. The hospital we were in didn’t have a pediatric neurologist so they consulted with a pediatric neurologist at Tulane. When we were being discharged, they told us the neurologist had ordered a metabolic evaluation. I knew at that moment we were finally going to get the answers we needed.

Two weeks later we sat in that neurologist office and he spoke those words that we were not prepared to hear. He said our son had Adrenoleukodystrophy, that he would more than likely die within 2 to 4 years, most of which would be in a minimally conscious state, unable to walk, talk, eat, etc.. (he actually used the word vegetative state but I hate that word because people are not vegetables). He said Hutch would most likely die during a seizure and there was nothing that we could do to help or stop the disease as he was too far progressed (spoiler alert, he was wrong about the last part!).

My husband was completely devastated. Oddly, I was still so grateful that Hutch had survived the seizure that finding out we had 2 to 4 more years with him still seemed like a gift. Within a week we were in a geneticist office, he asked what our plans were and we told him that we have been vetting hospitals just to find out more about the disease and what our lives would look like. He pointed us in the direction of the University of Minnesota. He told us they had treated more boys with ALD than anybody in the world. At this point we did not think Hutch was a candidate for transplant based on what the neurologist we met with had told us — thank God he was wrong.

One thing led to another, and the first week of January 2016 we were consulting with an amazing team of doctors at University of Minnesota to see if our son would be a candidate for a bone marrow transplant. At the end of our time there, they told us that they felt like Hutch would be a candidate. They didn’t know if he’d be able to live an independent life as an adult but they felt like BMT would preserve his physical abilities. We were thrilled AND scared to death!

Two months later, on March 16, 2016, we moved to Minneapolis for a BMT that took place on March 22.  We lived in the hospital for 40 days and then stayed in Minneapolis for the next 2 months. Hutch did exceptionally well through his transplant and we moved home at the very end on June. Then life got really difficult.

Hutch‘s case is different than most boys with ALD — his disease started in the front of his brain and there is no damage to the back of his brain. This means he has all of his physical ability still intact, but the front of his brain is profoundly damaged, so he can often look like a traumatic brain injury patient — he is impulsive, often inappropriate, and has no filter.

Anger and rage took over his body once we got home from Minneapolis.  Our girls, who were 15 & 10, had to move out of the house for a while because he was so out of control. Thankfully, better management of his dosing schedule of hydrocortisone, some amazing vitamins and blood pressure medicine worked and little by little we got our life back.

It took about two years following transplant for us to see a little light at the end of the tunnel, but now Hutch is in school and and loving life. He swam on his high school’s swim team and played golf for his school team also! He needs many accommodations, but he is smarter than he appears on paper.

We are very grateful for Hutch’s diagnosis, because as hard as it is, it saved his life and it explained all of the issues he was having. With Hutch’s diagnosis we determined that my dad had AMN (adult onset version of ALD) and more than likely died during an angiogram due to undiagnosed adrenal insufficiency.

Our lives are very different than we ever imagined, but also better than we expected following transplant. Because of Hutch is a poor decision maker and struggles to self-regulate, he needs constant supervision. But, he is here and has taught us a lot about life and the dignity of life. ALD took a lot away from us but it also gave us more than we could have ever imagined.

Last month, I went to a wake where the room was filled with laughter and stories. It was a celebration for a great man who enjoyed 101 years of living (or a solid 97 – life got a little uncomfortable after that point). Our family was honored to have known this man well. He lived with his granddaughter and her family who are dear friends of ours. His death left us all feeling sad, but it made sense. It was time. The cycle of life.

Yesterday I attended another wake. One of Jack’s classmates passed away last week. A young man who’s life was filled with challenges, but every time I saw him he wore a bright smile. I hadn’t known this young man well, but he and Jack shared a classroom for the last couple of years and his passing left me lost — not knowing what to do other than to go to the wake and pay my respects to his family. I decided not to bring Jack. Jack knows what happened, but I couldn’t bare having him focus on the loss (there needs to be some advantages to having a challenging life). I made the drive to the wake trying not to think too much about where I was going and was at the wake for less then ten minutes — just enough time to pay my respects and run out of the building before my tears started flowing.

I sat in the car trying to catch my breath and make sense of it all. How can nature can be so cruel and why is life – especially for some – so fragile?

I’ve been thinking about it all day and the one thing that’s making me feel a little better is thinking about all the people who filled that room yesterday. It was not the celebration that happens following a long life, but this young man clearly touched many lives in his short life. There were a lot of tears in that room, but there was also a lot of love.

I still can’t really make sense of this untimely loss, but I’m trying. The reminder of just how fragile life can be could have me in a puddle, but instead I’m trying to think of it as a gift. A reminder not to waste time and to enjoy every second with people that I love.

Why were a dozen people following us around with cameras and piles of questions for the last couple of days? We can tell just yet, but I can promise you that it will be more real than anything you’ve seen on Bravo.* 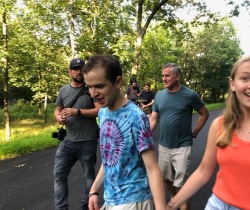 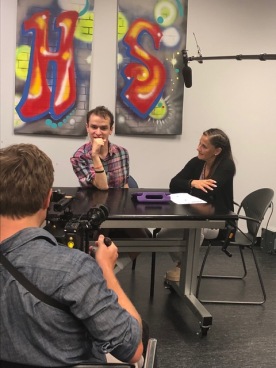 * I love Bravo – every last bit of their version of reality – it’s just that THIS is not Bravo.