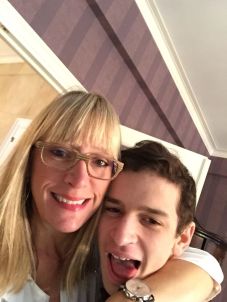 It’s been a while since I’ve felt that people were watching us. The kind of watching that people do when they are trying to be subtle.

My only explanation is that Jack was looking particular “normal” yesterday (am I allowed to use that word?). He was wearing over-washed jeans and a sweater with a tee-shirt poking out of the top. He had on hiking boots instead of his usual school footwear (which include brightly colored leg braces) and he was in desperate need of a shave. He looked like an average teenage boy.

We walked into the doctor’s office without drawing any attention. Before checking in, I walked Jack over to a chair, took off his coat and guided his rear onto the seat. This action requires me to literally bend him. The only person who noticed the routine was a young boy playing a video game across from us. As he watched me settle Jack down onto the chair, he made a face and grabbed his mother’s arm, “What’s wrong with that kid?”

Suddenly, everyone in the waiting room was trying not to stare at us. They quickly looked down at their magazines or phones as they kept one eye in our direction. I could almost hear their minds racing as they tried to figure out what was with wrong with this seemingly normal teenager. Just as I was getting ready to give a little explanation to the group, we were told the doctor was ready to see us.

As the nurse ushered us into the examination room she proceeded to have an entire conversation with Jack without noticing that he didn’t once answer any of her questions. I guess she was used to over-zealous mothers doing the talking for their sulky teens. It wasn’t until she told Jack to take off his shoes and hop on the scale that she seemed to acknowledge that Jack was “complicated”. As I knelt down to pry off his boots she said, “I have a cousin with Cerebral Palsy.”

Jack often get’s mistaken for being Autistic, but this was new. Without thinking I blurted out, “Jack doesn’t have CP. He’s has Adrenoluekodystropy . . . and Addison’s and Epilepsy, but not CP.”

I suddenly worried that I might have insulted her (and/or her cousin), so I continued, “Not that there is anything wrong with Cerebral Palsy. Jack has a lot of friends with CP. In fact, my sister-in-law has CP . . . We actually love CP.”

The awkward silence that followed was painful and I tried desperately to liven up the room by telling Jack ridiculous jokes. This only made things worse and as the doctor walked into the room the nurse left quickly and I could have sworn I heard her gossiping about our conversation with the other nurses in the hallway.

We saw the doctor and left the examination room eager to leave this errand behind us. We walked down the hallway toward the waiting room trying not to make eye contact with any of the nurses (all of whom were doing their best not to stare). As we checked out, we were met with another unsuspecting person who glanced up at us. Jack was standing with his arm tightly around my neck – a stance that I am very used to, but might seem rather peculiar to a stranger. She just smiled and said, “You are so lucky that he still loves on you. My boy won’t give me the time of day.”

I took a deep breath, preparing to go into my explanation about Jack’s challenges and inability to respect common boundaries, but then I thought better of it. “Yes. I am lucky.”

One thought on “We love CP.”