Ten years ago – almost to the day – our family arrived at NYPMSCH. Jack needed a stem cell transplant for a disease we had just learned existed one month earlier. We would end up living at the hospital for months and Jack would be in isolation most of that time. It was hell. One light in our room that always put a smile on our boy’s face, was a box that lived at the foot of Jack’s bed — The Box of Fun. It was the brainchild of my dear friend Kim. It was filled it with gifts and notes from everyone in our lives. Not just fun stuff, but a true reminder that we were loved. 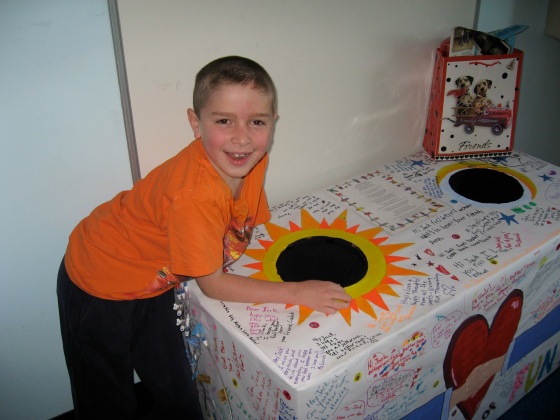 What many didn’t know then was that Kim had a stem cell transplant ten years earlier AND her colleagues at work had made her a box filled with goodies. Kim was paying in forward!

When Jack’s health stabilized and we adapted to our new life, our family wanted to continue the trend and pay it forward. We started making Boxes of Fun for each of the kids on the transplant floor at NYPMSCH. That was eight years ago.

Last year, Anna took over. She and her dear friend, Jane, created a club at Columbia High School and started raising money to fill the boxes. Let’s just say that they put my efforts to shame. They’ve raised unbelievable amounts of money and awareness AND have even expanded their program to Hackensack Hospital. I am blown away by these kids. Boundless energy in their goal to help others — Anyone who’s worried about today’s youth, needs to hang out with Anna and her pals for an afternoon. 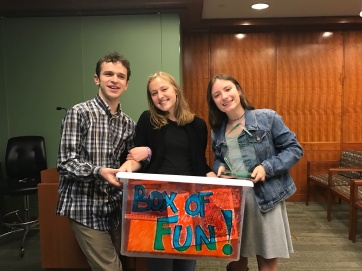 Yesterday’s ceremony was sweet, and the award itself needs to be displayed somewhere special – it’s HUGE, but the best part of the day was hearing stories from the Child Life team of people’s reactions through the years – not just the children who have received the Boxes, but the nurses and doctors who have come to expect that their patients will have a pile of goodies to distract them during their stay.

When we got the news that we’d been nominated for the award we were honored, but the truth is that we make the Boxes as much for us as for the recipients. It’s so important to recognize and appreciate when beautiful things are sent your way AND to remember to pay it forward.

Seven days until we hit Jack’s 10th Transplant Birthday. In honor of his birthday, I encourage all of you to take a moment and pay it forward. Make someone a Box of Fun, donate your time to a soup kitchen or food pantry, visit a neighbor who is going through a hard time OR make a donation to Jack’s school —  CLICK HERE. Just do something. Trust me – it makes the world a little better.

One thought on “Paying it Forward”