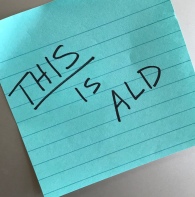 THIS is ALD is gaining some traction. Not just in the ALD world, but I’ve heard from many non-ALD folks that they are appreciating learning more about the disease. ALD can look very different person to person. Here’s a story about a boy named Nicholas. Another success story thanks to an early diagnosis.

Our 13-year-old son Nicholas is a thriving survivor of cerebral ALD. His story so far is one of the rare success stories of this devastating disease thanks to family history (which gave us the knowledge needed in order for him to be diagnosed at birth), the Lorenzo’s Oil study, early detection through brain MRI, and a bone marrow transplant (BMT).

My father died from complications of AMN (Adrenomyeloneuropathy is the adult onset version of ALD. It generally develops during the late twenties or early thirties and progresses more slowly) and I found out I was a carrier at age 15. We contacted Kennedy Kreiger Institute at Johns Hopkins (where my father’s neurologist Dr. Hugo Moser had been) to prepare for testing once I became pregnant many years later. My husband and I were devastated to get the results that our perfect little baby boy had ALD, he was only a week or so old when we received the news. It was one of the worst days of our lives. We enrolled him in the Lorenzo’s Oil study at 18-months-old (Lorenzo’s Oil is a combination of oils that is thought to limit the accumulation of very long chain fatty acids that build up in the brain in ALD patients. It can slow down the onset of the disease). He was raised on the strict low fat diet and daily intake of the oil in the hopes it would keep demyelination at bay. Nicholas also had yearly brain MRI’s and we made yearly trips to Baltimore for testing and follow ups with the specialists. Dr. Gerald Raymond kept a watchful eye on him for nearly ten years.

The Lorenzo’s Oil study ended when Nicholas was ten, and we were told that hopefully he had escaped the most devastating form of the disease. Within a year of stopping the oil, Dr. Raymond spotted a small lesion in Nicholas’s brain caused by ALD and our lives began to spiral. We knew this could be the beginning of the end and our only option would be a BMT. Nicholas was a perfect candidate for gene therapy with a Loes score of 1 (the 34-point scoring system used to describe the evolvement of ALD) and no other symptoms. So we waited and Nicholas underwent MRI’s every few months to monitor the lesion…we had time on our side due to very early detection and slow progression, but we felt like it was a ticking time bomb and it was the worst several months of our lives full of worry and the unknown. Life came to a halt in our minds and hearts, yet we had to carry on for our children’s sake. We were referred after six months to Dr. Wes Miller at the Univ. Of Minnesota Children’s Masonic Hospital for consultation.

Nicholas was now eleven and needed to know exactly what was going on. It was a horrible visit full of heart-wrenching details of what a bone marrow transplant involved and what we were facing if the gene therapy study wouldn’t reopen. Within a few months, we were told the study wasn’t reopening at that time, and our only option was a BMT. The time was now as Nicholas was still extremely healthy and strong and no outward signs of ALD. Despite the challenge of living away from home for four months and the harrowing medical treatment of completely wiping out our son’s immune system and replacing it with another, we now believe it was the best decision and that the Lorenzo’s Oil diet quite possibly helped delay any ALD progression until late in the critical childhood years. We had the challenge of no blood siblings (we have a beautiful adopted daughter), but were gifted with a perfect umbilical cord blood donor match that saved our son’s life. We couldn’t be more grateful for the ALD specialists and BMT team of doctors who did all they could to save our son’s life and halt his disease in its tracks (halted disease progression was already shown on the 30 day post BMT MRI).

Nicholas is one year out from transplant and healthy (with adrenal insufficiency) and active in athletics. We know he is a miracle kid and this is not the usual case by any means. Newborn screening must be passed in all states so that every ALD boy has a fighting chance. We also know and have seen the many risks of BMT, as we lost an ALD friend in MN to one of the many risks of transplant and have heard of so many others. Nicholas is a best case scenario, we are forever grateful for where he is now. We want to do all we can for other boys like him.

(I added a few details for readers unfamiliar with ALD — Jess)

It’s thrilling to read how well Nicholas is doing one year post transplant. Again, his family had the luxury (THIS SHOULD NOT BE A LUXURY) of knowing that he carried the ALD mutation. This knowledge allowed them to prepare and act — initially with Lorenzio’s Oil then with a BMT. 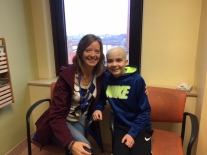 Since transplant, Nicholas has been busy running 5ks and has even finished his first triathlon. His family has also been actively raising money and awareness for ALD hosting a Run for ALD event this last November.