Last fall I went to an ALD symposium with several other families effected by our disease. Among the group was a couple, John and Kathy. I learned quickly that they had recently lost their son, Blake. I was shocked that just four months after losing their son, they had driven from their home in Tennessee to Atlanta to share their story. After spending two days with them, my shock turned to admiration for these strong, loving parents determined not to let their son die in vain. I reached out to Kathy as soon as I started the THIS is ALD project, hoping she’d be willing to share their story. She agreed instantly. The piece is upsetting, but beautifully written — as is Blake’s smile. 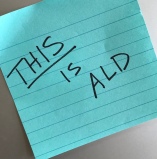 Our son Blake, like many other ALD boys, made all of his milestones as a baby and was a typical boy who enjoyed living his life to the fullest. He played soccer until 5th grade and performed well in school. In middle school, he ran cross country, enjoyed riding his mountain bike, sang in a special chorus group called Encore, and was an honor student. He was elated to be invited into the Duke Tipster program and was asked to take the ACT in 7th grade. He loved school, especially history, reading, and politics. In the first grade, he could not understand why he had to wait until he was 18 to vote!  Blake, like other ALD boys, had a great and wicked sense of humor.  I sometimes wonder if God blesses our ALD boys with such a great sense of humor because he knows they will need it to endure the monster we call Adrenoleukodystrophy.

On a normal Friday morning in January, Blake awoke with a virus.  That afternoon, his temperature went from normal to 107 in a matter of minutes.  We rushed him to the ER at Children’s Hospital where they attributed the virus to Addison’s Disease and adrenal malfunction, a precursor to an ALD diagnosis.  Blake was sent for a CAT scan and evaluated by the neurologist on call who admitted Blake on her suspicion of ALD.  We thought she was crazy!  After all, we had a normal, happy, healthy, 14 year-old son.  Before he could be released on Sunday, he suffered a grand mal seizure.  Within twelve hours, an emergency MRI confirmed the Adrenoleukodystrophy diagnosis.

One week later, we were on our way to Amplatz Children’s Hospital at the University of Minnesota to see if Blake would qualify for a bone marrow transplant. Blake’s Loes score, to the shock of the doctors in Minneapolis, was a 13.5. They decided that he would qualify because he was such a “high functioning” ALD boy. They could not believe he was in Honors classes much less making As and Bs! Blake had his first stem cell transplant on March 21st, 2012. He did not engraft. We were heartbroken and terrified for our son.  The medical team decided that since he was doing so well that they could try another BMT. He was only the 5th of 45 boys who did not engraft to undergo a second BMT. This time, on June 13th, they used actual bone marrow from a donor in Germany, and he engrafted at 100%! We were over the moon! We had saved our son! He had beaten the odds! Little did we know, this would not be the case.

We came home on September 28, 2012. Blake was legally blind by December. He went back to school the following August to start his sophomore year after being homebound his entire freshman year. He had an aide that took him to each of his classes. While Blake struggled with processing and math, his school modified for him in those areas. He continued to score high on state exams and performed well in his classes. He graduated in May 2016 with dreams of going to college. He wanted to be a neuropsychologist and move back to Minneapolis to work with children, especially ALD boys, going through bone marrow transplants. Through his 4 years of high school, we kept those dreams alive for him! By October of 2015, Blake was wheelchair bound. In February of 2016, Blake had a seizure that would take his speech and ability to swallow. He had begun to have problems with both a few months prior. He was in the hospital from February 27 until March 11, unconscious for most of it.  At that point, Blake needed a g-tube. Blake would finish his senior year at home in a hospital bed, but he was able to graduate with his class which was so important to him! Despite all of this, we enrolled him in Philosophy at one of our local community colleges. We were bound and determined to keep his dreams alive! He attended class three days a week, unable to speak or swallow, wheelchair bound, and completely blind. Blake would never, ever, give up!

On the Tuesday before Thanksgiving 2016, Blake had an hour-long seizure on his left side.  After, (he continued to have small seizures occasionally from June 2013 until this one), he was permanently bedridden. The doctors in Knoxville and in Minnesota felt that Blake’s ALD was progressing too deeply in his brain to detect, for his MRIs showed very little or no change from time of transplant until March 2016. The doctors did not understand his continued decline as other ALD boys with far worse MRIs were still walking, talking, seeing, and speaking.

Our beautiful son earned his wings at home on June 1, 2017 at age 19. He is now free of the body that so utterly failed him. He can dance, sing, laugh, walk, and see again! Blake Edward Switow is our son, warrior, hero, and our Guardian Angel! 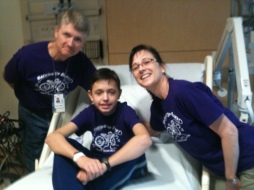 Always remember, laughter is good for the soul!

I’ve read over this piece a half dozen times, trying to figure out what to write as a follow-up. I’m having trouble finding the words through my tears. I connected right away with Kathy. She felt more like an old friend than an acquaintance at a conference. It’s heartbreaking to learn the details of their family’s journey with this disease. And, ALD didn’t just take their son, ALD was particularly wicked with their family.

Thank you Kathy for sharing your story. It’s important for people to understand that ALD doesn’t always start progressing at the same age and it doesn’t always follow the same path. I’m grateful for your honesty — you have a huge fan in NJ. If fact, after people read this, I’m guessing you have many!