My name is Kim and I’m the oldest of four children. I have 3 brothers. Angel , Cesar, and Alan. My brothers were all born healthy. Until 2016 nobody knew this horrible disease ran in the family.

December, 2015 my mom started noticing changes in my brother Alan – he was eight-years-old. He was having hearing problems and a hard time at school. My mother took him to a hearing specialist and they didn’t think anything was wrong. By May, 2016 things got worse. Alan started complaining of a terrible headache and was taken to a local hospital. They transferred him to a bigger facility, but the doctors had trouble figuring out what was going on. It wasn’t until they did an MRI that they discovered Alan had ALD. 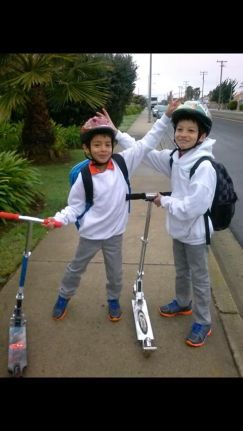 Alan and Cesar before ALD

My parents are Mexican and speak little English. They understood the diagnosis, but had many questions. When they learned that ALD is genetic, my two other brothers, Angel and Cesar, were tested — Cesar tested positive for ALD. My parents were heartbroken.

This was the same month I found out I was pregnant. When my parents shared the news with me, I took it pretty bad. I was six months pregnant when I found out I was a carrier. I learned that, since I was having a boy, he would need to be tested as soon as he was born.

Alan’s health started going down hill quickly. Doctors told my parents Alan had very little time and there wasn’t anything anyone could do. He lost his hearing, vision, speech, and started having trouble walking. My mom became his full time caregiver. Cesar was not as symptomatic and qualified for a bone marrow transplant (BMT) which he had in December, 2016. My mother was now caring for one son who was recovering from a BMT and another who’s disease was moving quickly. 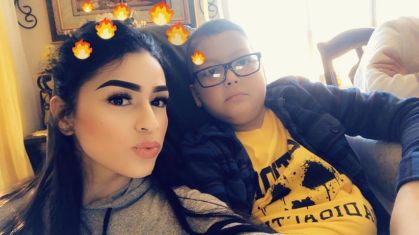 My son, Maximiliano, was born just after Cesar’s BMT and was 3 weeks old when he was diagnosed with ALD. By January, 2017 my brother Alan was in a vegetative state and Cesar was doing well and was out of the hospital. It was really hard on everyone. We couldn’t believe three people in our family had ALD, including my son. The reality really set in when on March 23, 2017, my brother Alan lost his fight to ALD – just a few days after his 10th birthday.

Maximiliano is now a year old and he’s the sweetest little boy ever. He’s so smart, always smiling, and super curious. It’s really hard for me knowing my son has ALD. Knowing ALD took my brother away from me. Maximiliano is seeing specialists at UCLA and at Santa Barbara. I’ve gotten in touch with doctors at the University of Minnesota and I plan on taking my son this summer, and seeing what they have to offer.

Next month will be a year …a full 365 days since my little brother left us. It’s been really difficult for all of us to continue our lives without him. Holidays were more sad than happy. There were a lot of ‘firsts’ without Alan. In my heart I know he’s in a much better place. He’s at peace.

I really wish Alan had been diagnosed sooner and could’ve gotten treatment. Newborn screening could’ve saved his life. I think about everything that’s happened in the last 2 years. I’m a strong believer in God, but can’t help but think to myself why did He let this happen? To an innocent child? This horrible disease ruined my family but also made it stronger.

This beautiful family lives in California, which has now added ALD to it’s newborn screening panel. I try not to spend too much energy with “if onlys”, but I am glad that future generations of ALD families in CA will have the luxury of knowing and preparing. Alan didn’t have that luxury, but Cesar is doing well because he was treated in a timely manner and Maximiliano is being monitored by a team of specialists who will be prepared to help him IF he becomes symptomatic.

Corresponding with Kim has been an honor. She has been so honest and informative. I wanted to share two other notes I received from her last week:

I forgot to tell you, when I was pregnant I would place both of Alan’s hands on my belly, and he would get this huge smile and hug me because he knew it was me. He couldn’t see, but he was still aware of his surroundings. Before he lost his eyesight I showed him a picture of my ultrasound and he told me my baby looked like a little alien! I remember he was so happy he was going to be an uncle …

The night before my brother passed away, my mom had a dream. She told me Alan appeared to her in her dream and he told her that he was going to be okay but he didn’t want her to cry. I get the chills every time I think about this. I guess that was his way of letting my mom know … the next day he passed.