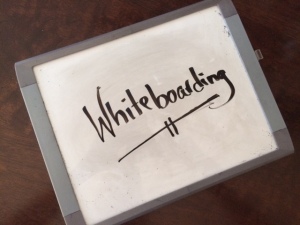 I said in my last post that progress doesn’t always follow a straight line, but it looks like Jack may be full steam ahead with his latest accomplishment. We call it WHITEBOARDING!

We present Jack with a question (either verbally or in writing) and write three choices on his whiteboard. He circles his answer. His circles can be a little haphazard, but they’re legible enough to be clear. We’ve asked questions that have specific correct answers and questions that provide Jack with a decision. He’s able to answer everything without any trouble.

It’s remarkable, but we’re still quietly clapping (although we are chilling some champagne). We just want to see if Jack’s brain continues to cooperate with his new skill. And, I’m a little nervous that Jack is being so nonchalant about his new ability – as if he’s done it forever. He’s potentially just broken down his biggest barrier, and he’s acting like it’s no big deal. My only explanation is that not talking hasn’t really bothered him too much.

Everyone else, of corse, is thrilled by the idea that Jack is gaining a voice. The doors that could open for our little man are endless. He can tell us how he’s feeling and what he wants to do. He can be part of the conversation.

My only complaint is that I now feel obligated to ask all three of my roommates what they want for dinner. One luxury of having a silent child is that I could make some decisions for him. Going out for meals has been especially fun, “I will have the spinach salad with the dressing on the side. My son will have the bacon double cheeseburger with a side of french fries.” There are NO calories if you don’t order it for yourself.

1. Jack can absolutely read. We’ve been making him prove it all week long.

2. One Direction is his favorite band. Better than The Beatles, The Grateful Dead, and The Stones (Dan is a little upset, but he’ll get over it).

3. Jack still prefers waffles to pancakes, and does NOT like eggs.

4. I leave him on the toilet too long.

5. He’s done watching anything having to do with “Real Housewives.”

7. Victoria Justice is cuter than Zoe (from Zoe 101), but he still loves Zoe.

8. He wants a tattoo and an earring.

This morning, as Jack and I sat on the front stairs waiting for the bus, I wrote, “How do you feel about your whiteboard? Love it, It’s okay, Sick of it.” He looked at me, laughed and circled “Sick of it”. Then he threw his arms around me and gave me one of his killer hugs. Sorry Jack, but this one is here to stay (I hope).